The Unloading - Taking Profit from The Table

The flight to safety continued with gold strengthening and touched the $1300 psychological resistance zone. I started accumulating gold miners in Oct/Nov 2014 during the gold sell off then. I didn't expect that the bearish sentiment on gold to change so fast.  My earlier plan was to hold the gold miners for at least 6-12 months.

I also sold half of my position in Blackrock European Eqty Income A6 SGD-H, to lock-in some profit. In the meantime, it seemed the high yield fund offered a decent yield at the current price level. I initiated a position in Fidelity Asian HY AMDIST SGD Hedged. The fund distribution rate was 6.8% based on my purchase price. 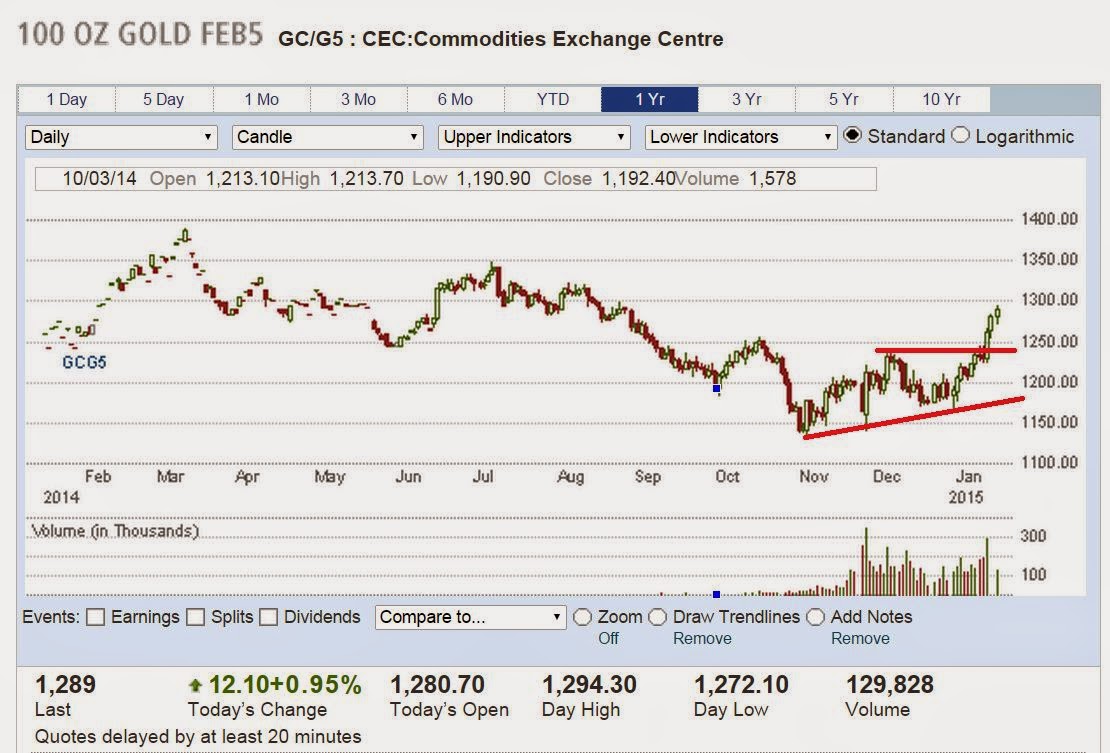 Platform Fee is Killing Me

So I've been thinking for lower cost alternative investment such as ETF and even build my own dividend portfolio. For this purpose I've been looking at offerings from TD Ameritrade (thinkorswim) and E*TRADE.

TD Ameritrade offers a wide range of commission free ETF, however they currently do not have a local bank account to facilitate local fund transfer. They can only accept international wire transfer which will cost $25-$30 per transfer. They're willing to reimburse the cost incurred for international wire transfer up to USD 100. However as I will be doing a regular contribution instead of a lump sump transfer, this will not work for me. They said they would offer a local fund transfer facility by Q1 this year.

E*TRADE on the other hand offers local fund transfer, and offer some commission free ETF. However the more liquid ETF (such as VanGuard) are not free of commission.

Anybody has any comments or suggestions? You're more than welcome to leave your suggestions.

SNB surprised currency market on 14 January after deciding to scrap 3-year-old peg of 1.20 CHF per EUR. The decision swiftly sent the EUR down to 0.85 CHF (~41% drop). This sudden and surprise move caused a number of forex brokers to go into insolvency.

Gold & gold mining companies were the beneficiaries of flight to safety due to volatility in currency and equity markets.  It finally broke it's 3 month high of USD 1,240 and reached a high of USD 1,280 before closing at USD 1,276.
As I mentioned in my last week update, I expected gold and gold mining companies to benefit and continue their rally due to shifting to assets perceived as safe havens.

Same old same old I guess. Nothing much to say, except that all the speakers think it's still bullish for equity markets especially Asia. Within Asia, Hong Kong and Singapore was believed to be the cheapest market at the moment.

There was one fund manager from HSBC, Elina Fung, that impressed me because of her in-depth insight in Asia smaller cap companies.

Rise of The Gold Mining Companies

Gold is trading near its 3 months high and even trying to take out the high on 9 Dec 2014 of USD 1,239.00. Meanwhile, the stock of gold mining companies continued with their rally in the past few days, showing some underlying strength despite the volatility seen in general stock market index.

On a 5 year basis, the spread between fund investing in gold mining companies and one of the major stock index, such as S&P 500, are at its widest range. However in the 6 months and 3 months chart, we can see the spread are narrowing. As the stock index started to turn down, the gold fund started to turn up.

United Gold and General fund in my portfolio has turned from -3.77% to +9.22% as of today. I think there will be more upside in the near term, and I'll be looking to take some profit gradually as the price rises. 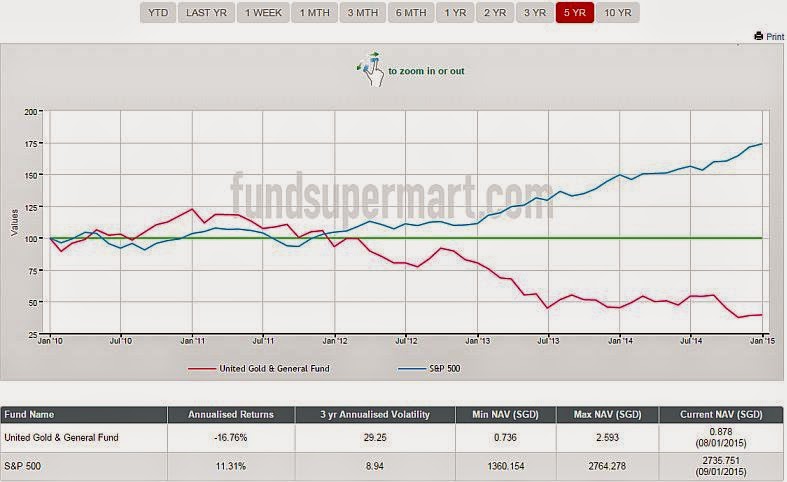 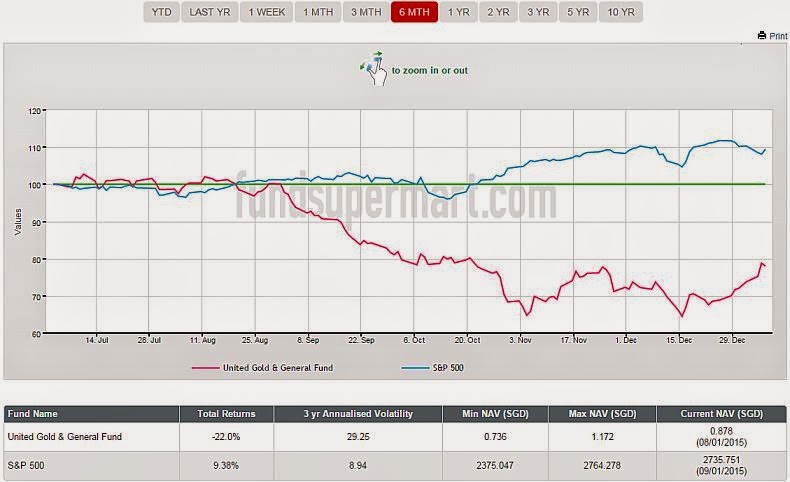 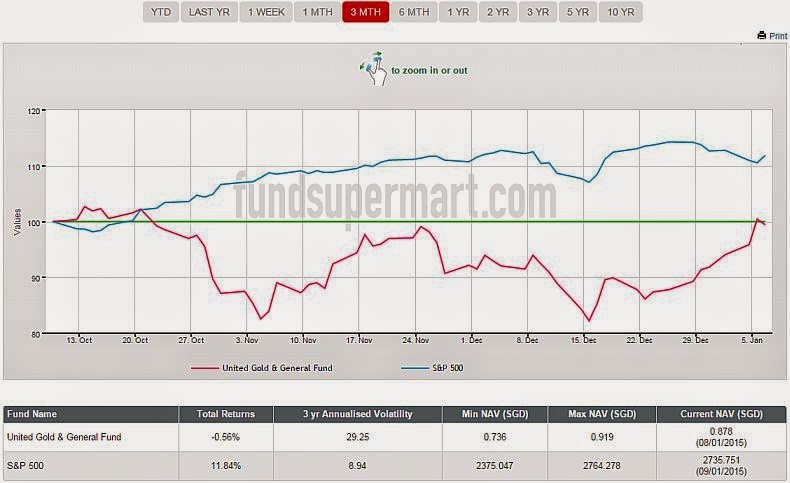 My youngest daughter got a free online voucher for an original glazed doughnut from Krispy Kreme through the chat application LINE. She asked me and my wife to accompany her last Sunday. However because we're going somewhere else, we told her that we'd redeem it next week or some other days. 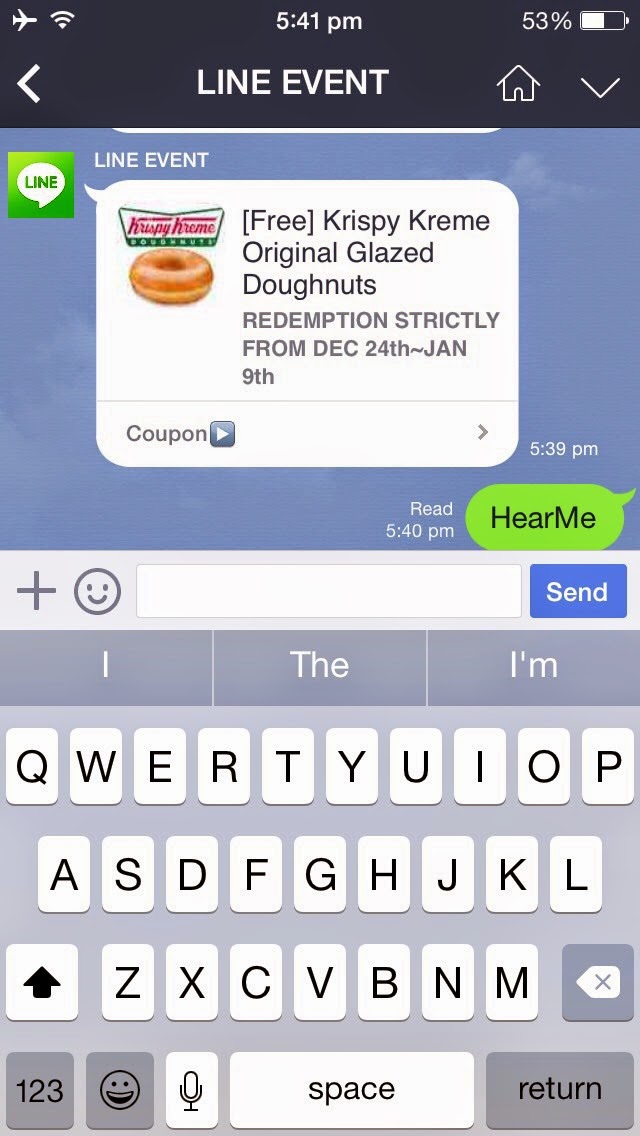 So she asked again this morning. But alas, the voucher unfortunately expired on 9 January 2015. Not wanting to disappoint her, both I and my wife decided to buy 2 pieces for her and the eldest sister.

While we're in the queue, I saw 1 piece of original glazed doughnut cost $2.60. My eldest daughter saw the price too and told me to buy her Dunkin Donuts instead, because it's cheaper and probably she could get 2 pieces for the same price. She would eat one today and kept another one for school recess on Monday. That way, my wife wouldn't need to prepare food for her, and she wouldn't need to spend her pocket money.

Such thought coming from a 10 year old actually surprised me. I ended up buying a piece of Krispy Kreme for my youngest daughter and half a dozen of Dunkin Donuts for $9 or $1.50 each, enough for the whole family.

As we're walking to the bus stop, I told my eldest daughter to study math well. I told her that I would teach her the power of compounding, and she might just have her first million by saving bit by bit from young and invested them wisely.
Posted by Yaruzi at 12:49:00 AM No comments:

Over the week, there was increased volatility in risk assets. Major stock index such as DJI, S&P, STI, Hang Seng saw fierce sell off, followed by quick recovery. The volatility was triggered by further drop in oil price below psychological support of USD 50.00.

The perceived risk caused flight to safety with buying seen on assets that were considered "safe haven" such as gold, treasury bills, and USD. As a result yield on US 10 year T-bills dropped below 2%.

Fortunately for my portfolio, United Gold and General fund that invested in gold mining companies acted as a hedge. Apparently the buying in gold also spread into buying bashed down gold mining stocks. Many gold mining stocks rallied more than 5% in 1 day. Most of them were at 1 month high and some were at 3 month high. I think gold mining stocks may be bottoming and probably in initial phase of medium & longer term reversal.

As a result of USD strengthening and sell off in EUR, SGD was also impacted because it is pegged to a basket of currencies. The sell off in SGD, caused the SIBOR to spike. Those who are over leveraged due to years of low interest rate may want to be cautious. The spike may be a start of trend reversal in years to come.
Posted by Yaruzi at 8:36:00 PM No comments: 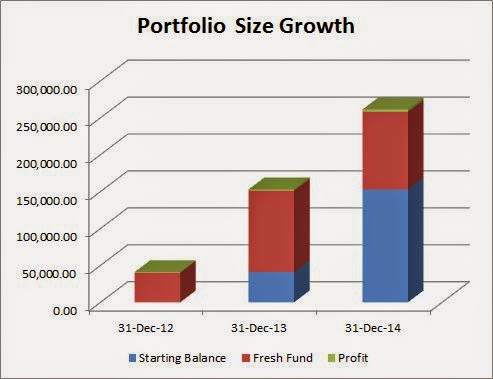 Link to Yaruzi's unit trust portfolio allocation as of Dec 2014.

Email ThisBlogThis!Share to TwitterShare to FacebookShare to Pinterest
Labels: Portfolio